I object to despotism, death, and destruction, therefore I'm some kind of evil being?

Those who cannot remember the past are condemned to repeat it a highly sought-after voting bloc.

Just because someone else is holding the gun doesn't change the fact that someone is engaged in the act of robbery.

If I recall correctly the Allies only hanged one propagandist at Nuremberg.  Obviously the willing collaborators in the Mainstream Media didn't get the message or they believe that the message doesn't apply to them.  Should our present internal political situation devolve into an open civil war, I'd suggest doing a proper Roman style decimation of the willing propagandists in the MSM.  That's hang every tenth antihuman hack.

H. Beam Piper once wrote that political revolutions occur in a nation because the ruling class becomes discredited.  The Republican Party has to a large degree discredited itself by their continued insistence on practicing politics as usual and their continued practice of making deals with the other side.

A totalitarian is a totalitarian.  It doesn't matter if the bullet in your head was placed there by a National Socialist, or a Communist.  What does matter is that you are the victim of someone who truly believed that you and other people existed to serve as tools and materials for the construction of their ideological fantasy and who also believed that those who do not submit are trash to be disposed of.  Every member of the founding leadership of the Communist Party of the Soviet Union was once in the custody of the Russian Police for their revolutionary activities. They should have been put to death, but were instead imprisoned and eventually released. Adolf Hitler was arrested and tried for his attempt to overthrow the State Government of Bavaria by force. He should have been hanged for treason, but was instead imprisoned and released.  Tens of millions of people died because persons in positions of authority did not recognize the danger that these violent revolutionaries represented and failed to exercise the full powers available to them to prevent the great massacres of the Twentieth Century.

To deny free will is to deny personal responsibility for one's own actions.  And in an age when one can kill more people with the stroke of a pen than with a lifetime's use of a personal weapon that is a pretty useful excuse.

Hatred is normal for Leftists.

“We must teach our children to hate. Hatred is the basis of communism.”

On the subject of Marxism, Mark Hendrickson wrote:

"The hateful spirit of Marx and Lenin has suffused all leftist ideologies, movements, and regimes, whether Soviet communism, Hitler’s national socialism, or today’s illiberal progressivism and pagan environmentalism. Only hatred could explain the willingness to kill, enslave, and rob vast numbers of innocent human beings. Hatred corrodes one’s conscience. Under its toxic influence, a person will regard man’s God-given right to be secure in his life, liberty, and property as nuisances to be overcome, not commandments to be obeyed. The flip side of hatred is an inflated self-love, self-importance and self-righteousness so extreme that respect for other human beings diminishes and, in extreme cases (Stalin, Mao, Castro, Kim, et al.), disappears."

When I was involved with the U of M Objectivist Club, we had several lecturers from the Ayn Rand Institute.  One of the lecturers was Dr. Peter Schwartz on the subject of Environmentalism.  The club put up several posters advertising the lecture.  Some of those posters were replaced by leftists with posters with obscenities scrawled on them, including swastikas. 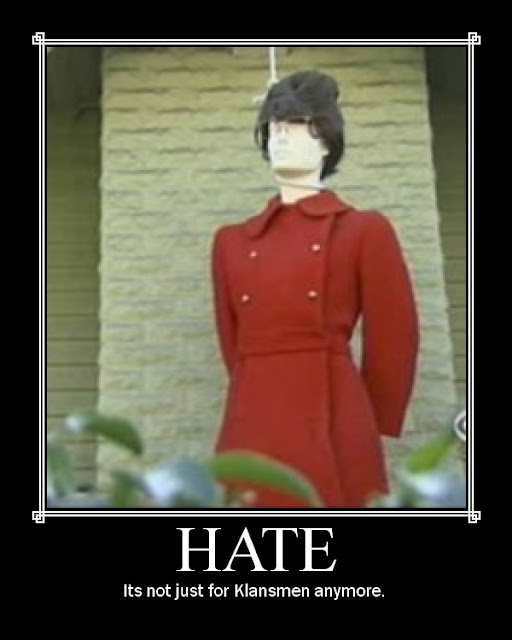